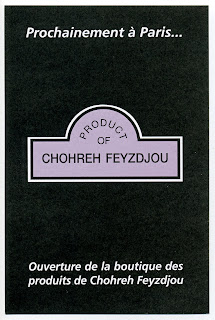 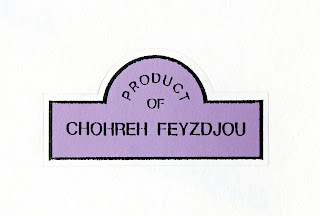 On this day, February 17, Chohreh Feyzdjou (1955, Tehran, Iran – 1996, Paris) died 13 years ago in Paris. I met her in 1993 when I was working at Peninsula Foundation, Eindhoven. She was invitated to participate in the exhibition Hond & Hamer (De Fabriek, Eindhoven, 1993). Peninsula produced a catalogue (Product of Chohreh Feyzdjou) of her installation for this exhibition. A year later we produced another book for her: Product of Chohreh Feyzdjou – Textes, on occasion of her exhibition at Galerie Nationale du Jeu de Paume, Paris, in 1994.
In the gallery space of Peninsula there was in 1995 a personal exhibition Products of Chohreh Feyzdjou, Série B. Sadly it was her last exhibition, she died a few months later.
In 2003 her work was shown, as a very large installation, at the Documenta XI in Kassel, Germany (8 June – 15 September 2002, curated by Okwui Enwezor)
The complete collection of work from her studio was acquired by the French state in 2002, and now on loan to the CAPC Musée d'art Contemporain in Bordeaux. This collection was shown in the exhibition Chohreh Feyzdjou, Tout art est en exile at CAPC, Bordeaux
(8 February – 2 September 2007), on which occasion an extensive catalogue about her work was published.
A tribute to the artist was paid on 6 June 1996 at the École Nationale Supérieure des Beaux-Arts, Paris. On this occasion there were readings by Pennina Barnett, Catherine David, Leïli Echghi, Hou Hanru, Jérôme Sans and myself. Here's my text which was presented with a slide show. (thanks to Tjeu Teeuwen and the people who made contributions for the slide presentation)

My name is Peter Foolen, and tonight I would like to tell you something about the work of Chohreh Feyzdjou in cooperation with Peninsula Foundation. Peninsula is an artists' initiative, founded in 1986 in Eindhoven, Holland. We organize exhibitions of contemporary art and publish editions and artists' books.


On a sunday evening in February early this year, Dennis Bouchard telephoned me, and told me that Chohreh had died. This dreadful message shocked us all very much. We went to Paris to attend her funeral, on a bleak winter-day. We will remember the sad day on which we burried her. But above all we remember the pleasant meetings on the fine days in Paris

Thank you for your kind attention.