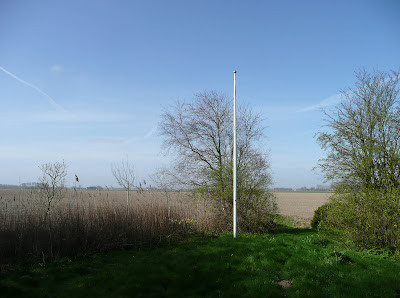 a project on Kolham by Thomas A Clark

The Flag Club was founded this Spring by Rolf van Hulten and Peter Foolen. The headquarters of The Flag Club is a green oasis in a place called Kolham, near Hornhuizen on the Hogeland, Groningen, the Northernmost region of Holland. It is a small farmer's cottage enclosed within a garden with some trees and hawthorn - and a recently installed flagpole. The surrounding landscape is almost empty as far as the eye can see, only meadows and fields and on the horizon some solitary farms and the Waddenzee dike. Often a strong wind is blowing: an ideal place to fly a flag.

The Flag Club invites artists to design a flag for this pole on this remarkable site. The first flag for this project is invented by the Scottish artist and poet Thomas A Clark.

The flag is a field of bright yellow with, in white, two words on it:

In other words, an abstract work about colour. The flag should be flown against a blue sky. On days that are grey, if the flag is flying, it may be thought of as a prayer for blue, for better weather! White lettering on yellow will not show up at a distance, the work is then pure, apparently without concept, just yellow on blue.

Kolham is not far from Pieterburen, the village where the Pieterpad starts, a walking way to the Sint-Pietersberg near Maastricht in the South: the journey brings the traveller eventually to the hills of Holland and you could also go further South, to the Ardennes and the Alps.

Thomas A Clark has written in 1999 an enchanting text entitled The Mountains Of Holland. This text was the inspiration for the artist to make another work for this project on Kolham, after having seen the flat landscape of this site.

The work is an enamel sign with, in white, the text

The enamel sign is executed in a traditional Dutch model with four ears in the corners. This sign, attached to the wall of the cottage on Kolham, transforms this site to a base camp for an expedition to The Mountains Of Holland. But also every other place where this sign is installed will transform to a base camp for an imaginary or real journey.

The flag and enamel sign by Thomas A Clark is published in an edition of 20 copies exclusive for the members of The Flag Club. The flag and enamel sign are collected in an acid-free box, signed and numbered by the artist. The box also includes a DVD showing a movie of the flag flying on the location on Kolham and the original text The Mountains Of Holland by Thomas A Clark, printed letterpress in 1999.

The club will be limited to have only 20 members, who receive the edition and will be invited to join and celebrate the event of the flying of the flag this Summer in Kolham; drinks and food will be served.

The contribution for membership is € 350. The members of The Flag Club will receive the box with the works by Thomas A Clark and have priority to order the following editions: the members are supporting the continuity of this project, the club will invite once or twice a year an artist for a project on Kolham and to design a flag and a special edition.

With his wife Laurie, he runs Cairn Gallery since 1986, an important space for contemporary art, for many years situated in Nailsworth, the Cotswolds and since 2002 based in Pittenweem, a fishing harbour in Fife, Scotland. Cairn Gallery has shown the work of Alan Charlton, Trevor Sutton, Peter Liversidge, Hamish Fulton, Ian Whittlesea and many others.

Thomas A Clark and Laurie Clark are also running the Moschatel Press since 1973, publishing their own books and editions.

Thomas A Clark has made many site-specific installations and interventions in museums, galleries and in public space, recently on a large scale at New Stobhill Hospital, Glasgow.

And Thomas A Clark and Laurie Clark had an exhibition at the Van Abbemuseum, Eindhoven, in 2007: A Bright Glade.

selection of publications by Thomas A Clark

Signed and numbered by the artist. Published in an edition of 20 copies.

The box will be published in June 2011. When you order the box you are a member of The Flag Club and will be invited for the launch of the flag on Kolham in June.

Email ThisBlogThis!Share to TwitterShare to FacebookShare to Pinterest
Labels: the flag club, thomas a clark

Since the late 1960s British artist Hamish Fulton has made images and text pieces in response to his direct physical engagement with the landscape and most recently - the city. In 1973 he resolved to ‘only make art resulting from the experience of individual walks’, a strategy that he maintains today.

Fulton will present Slowalk (In support of Ai Weiwei) at Tate Modern as a collective action created specifically in response to the iconic architecture of the Turbine Hall and in the context of the recent disappearance of Chinese artist Ai Weiwei, whose work Sunflower Seeds is currently on display in the east end of the Turbine Hall as the eleventh project in the series of Unilever Commissions. Fulton’s Slowalk (In support of Ai Weiwei) is conceived as a meditative experience to which he invites ordinary people to come together and walk very slowly, in a formation created by the artist over a period of two hours. This is a form of silent activism, where the participants are both art and viewer on a communal journey. Both Fulton and Ai Weiwei explore the role of political and social activism as a force for change in art and as such this action forms a public gesture of solidarity towards Ai Weiwei and freedom of expression.

A number of participants are required for Hamish Fulton's Slowalk (In support of Ai Weiwei). Those who are interested in volunteering should email hamishfulton.volunteer@tate.org.uk no later than Friday 29 April for details on how to participate.

from Press release Tate
see http://www.youtube.com/watch?v=oCc8Rs4sOVY
at April 27, 2011 No comments: 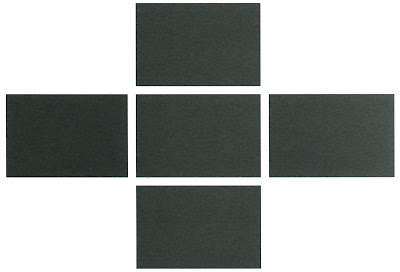 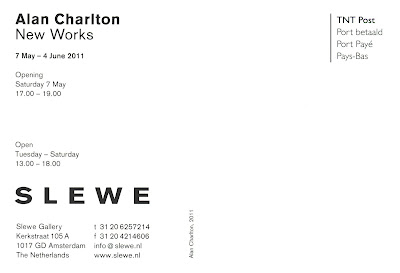 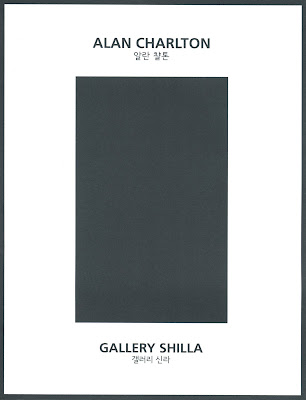 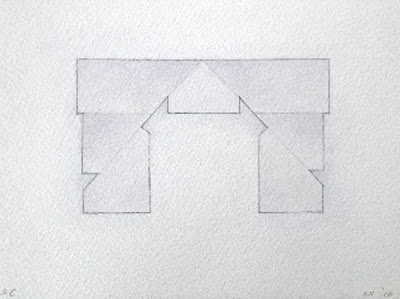 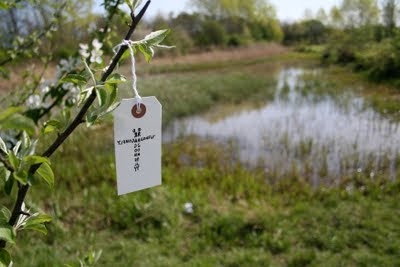 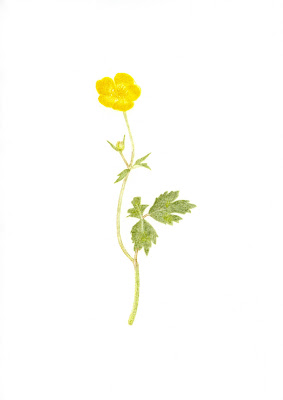 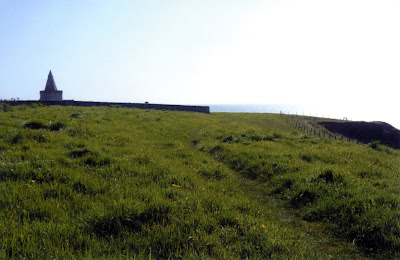 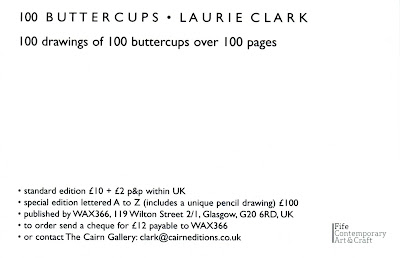 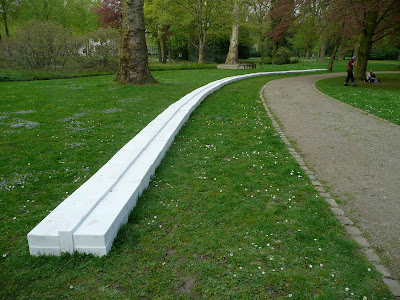 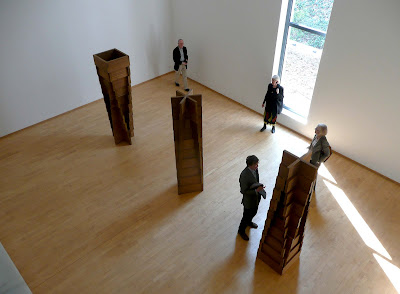 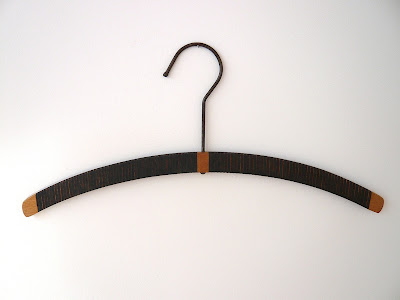 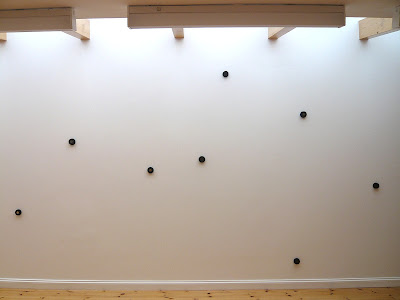 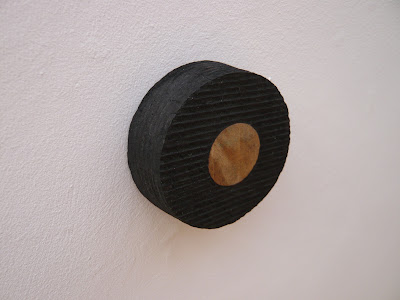 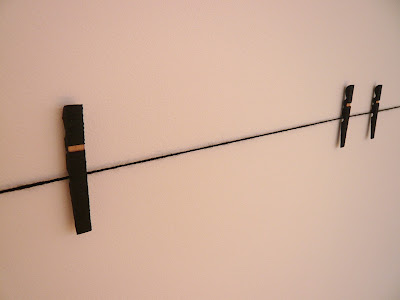 The terms of this work are sunlight on wood. The medium
is sunlight focused through a glass lens, the material small
fragments of wood reclaimed from beaches. As minutes
accrue from successive seconds, burnt dots accrue into
lines. The work happens in a mean space between the
properties of wood and the impression of the burn.

There are traces of previous use in the wood (drilled
holes, nails, paint, machined shapes), the pieces vary
in size but all could be held in the hand. The lines give
an account of the objects whilst marking the time of
their making. We are reminded that history does not
offer evidence of the past but the story of the past
told today. 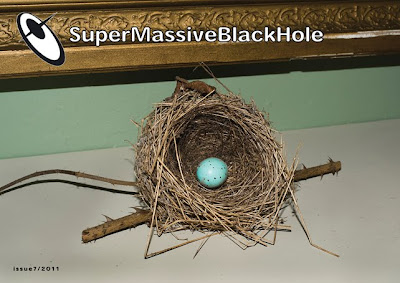 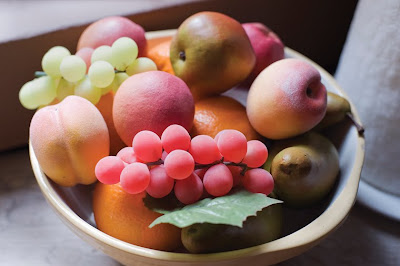 SuperMassiveBlackHole Issue #7 is out now and available for download at 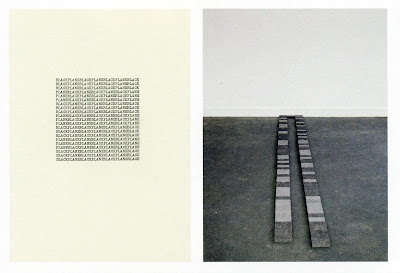 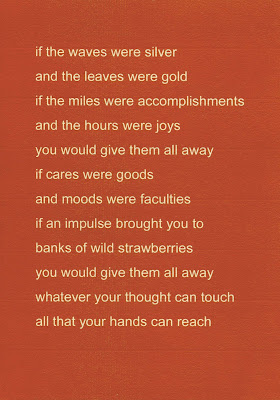 Thomas A Clark
Generosity, 2010
card for the exhibition Poetry Beyond Text
Visual Research Centre, Dundee, March 2011
at April 06, 2011 No comments: 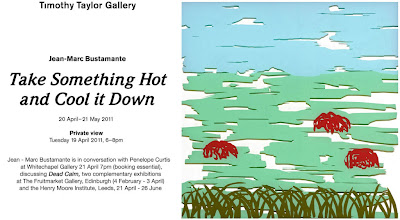 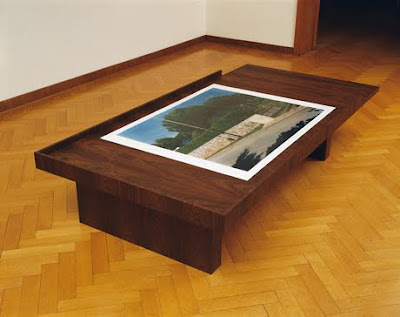 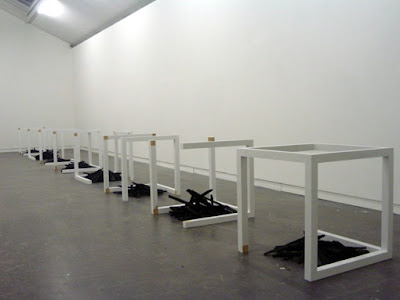 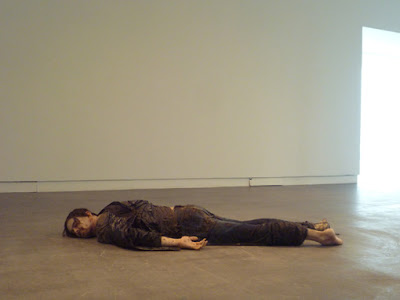 Jeremy Millar
Resemblances, Sympathies, and Other Acts
26 March – 7 May 2011
CCA
350 Sauchiehall Street
Glasgow G2 3JD
Scotland, UK
www.cca-glasgow.com
This exhibition by celebrated artist Jeremy Millar provides a rare opportunity to bring disparate sculptural, photographic and video pieces together with new commissions, such as the shocking, life-size cast of the artist, Self-Portrait as a Drowned Man (The Willows).

Millar is fascinated by the history of culture, especially at those points when a particular idea, or piece of work, is beginning to emerge or is coming to an end. In using a broad range of aesthetic approaches, Millar aligns his practice with that of others who came before him in the hope that the past might be reactivated within the present.

As with many of his earlier works, here Millar draws upon a broad range of artistic, literary, and philosophical sources. Beyond their own particular sources, what the works share is a concern with what constitutes life: when does something come alive, and at which point does life leave it? 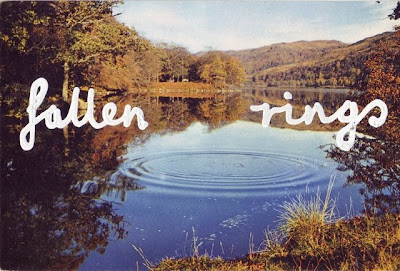