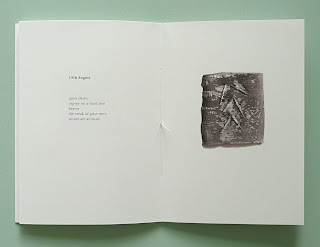 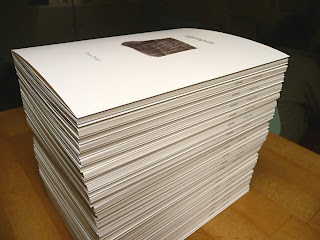 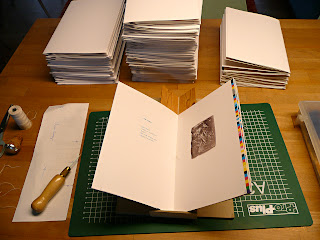 The Algonquin group of languages is thought to be eleven thousand years old. It is spoken by tribes in an area which encompasses North Dakota through to Michigan and up through Manitoba, Ontario and Quebec. Around 2000 BC a written language evolved which had its beginnings as bite marks on bark.
I experimented to find out how you could make bite marks on Birch bark and found that if you fold the bark, bite and then unfold, you create a line, which must have formed the basis of a cunelform writing. For each of the seven days I collected one piece of Birch bark and kept a diary of things seen, heard, experienced and sensed. The result is this small publication.

statements Chris Drury
Chris Drury – Algonquin, 2008
A small book about a canoeing trip in Algonquin Provincial Park, Ontario, in August 2003. Published by Chris Drury and East Port, Lewes, Sussex. Edited by Kay Syrad, designed by Chris Drury and Peter Foolen. Printed in duotone by Van den Eynde, Belgium, in an edition of 500 copies, signed and numbered. Hand sewn, 24 pages, 15,2 x 21 cm.
You can order this book from me or from Chris Drury (see his website)
Price £ 10 / € 12
at February 03, 2009